Global Motor Oil and Lubricants Manufacturer will Continue to Serve as Primary Sponsor of Brent Larson in the World of Outlaws Late Model Series.

Cyprus, California (January 20, 2022) – Motul is pleased to officially announce it has re-signed as primary sponsor of Brent Larson Motorsports in the World of Outlaws Morton Buildings Late Model Series.

“We’re excited to continue the strong momentum of our partnership with Brent Larson and his team into 2022” said Nolan Browning, Motul Brand Manager. “Having an experienced driver give feedback and put our performance lubricants to the test has been instrumental in the development of our racing products, like the newest 300V engine oil formula.” 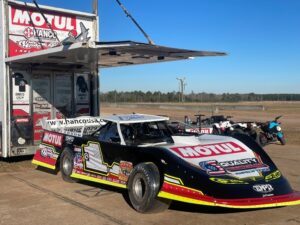 Larson is a multi-championship winning dirt late model race car driver with over 104 career wins to his name and too many top-podium finishes to count. He is the 2007 DTRA Late Model National Champion and has won the prestigious Cedar Lake Speedway Track Championship 5 times.

He currently sits seventh on the all-time Late Model win list at Cedar Lake Speedway with 28 victories in the division. Brent has made improvements in 2021 finishing out the season 8th in points, an improvement from his 2020 season.

“We’re definitely making progress and improving, and its thanks to Motul that we are doing so,” said Brent Larson. I’m very thankful to have a long-term relationship with Motul, they’re great people and have tremendous oil products. We have a great relationship and work closely to grow their business beyond just putting logos on the race car. They’re oils are the best we’ve ever seen, Motul has the best oil brand out there right now, I’m proud to represent a premium high-performance motor oil and lubricant brand with such a rich history in motorsports,” said Brent Larson. “I’m excited for the 2022 season to begin,” Larson continued.

About Motul – Motul is a world-class French company specialized in the formulation, production, and distribution of high-tech engine lubricants for two-wheelers, cars, and heavy-duty applications. Present in more than 80 countries, Motul USA was established in 1989 as a subsidiary of Motul France and is based in Southern California. Motul is recognized as the specialist in synthetic lubricants. As early as 1971, Motul was the first lubricant manufacturer to pioneer the formulation of a 100% synthetic lubricant for automotive engines, the 300V lubricant, making use of Esters technology from the aeronautical industry.