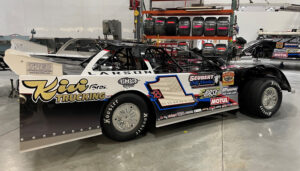 Kivi Bros Trucking, based out of Duluth, Minnesota, is a versatile transportation company specializing in flatbed, end dump & heavy haul. The typical cargo includes building materials, steel, new machinery, and bulk products servicing the continental United States (including Alaska) and Canada. Kivi Bros. prides itself on the value and treatment of its employees. Drivers for Kivi Bros. are well compensated and outfitted with top-of-the-line equipment with service routes tailored to each driver.

“On behalf of Kivi Bros Trucking, we are very excited about the partnership with Brent Larson Motorsports to bring our name to the national level in racing sponsorships,” said Derek Kivi, President of Kivi Bros. Trucking. “With our roots in Minnesota and Kentucky, having our name on Brent’s car only fits with him being a Minnesota native and will be very exciting for our team to follow and attend various races across the country. Brent has family that works for our company, and we view him as family. With Kivi Bros being a national carrier, we have trucks running all over this country every day and hope that some of the drivers can have the opportunity to stop at some of these races to cheer on Brent. We are excited to deploy a national driver recruiting effort through Brent’s racing program and bring in new potential customers.” 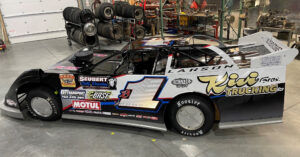 “I’m excited about this partnership and very thankful to Kivi Bros.! It’s great to be partnering with another Minnesota company that prides itself on how they treat its truck drivers; Kivi puts its drivers and customers first, and I’m proud to be a part of such a great organization,” said Brent Larson. “Our racing team has grown to a higher level of performance these last few years. In the same way, Kivi Bros. Trucking has aggressively grown its business! This partnership is a great match for both of us as we pursue higher levels of success going forward,” Larson continued.

About Kivi Bros. – Kivi Bros. is a 3rd generation family-owned transportation and logistics company offering best-in-class services in the open-deck, end-dump, and heavy-haul industries. Our servicing areas include the continental United States (including Alaska) and Canada. In these markets, we offer premium services using new top-of-the-line equipment from full truckload to less-than-truckload, as well as multi-axle RGNs. Kivi Bros., established in 1995, quickly became an industry leader in customized transportation services while providing a safe and reliable environment for all. We believe in maintaining a family-oriented culture while leading by example to promote teamwork, professionalism, and integrity, just as we have done for three generations. Please visit Kivi Bros. online at kivibros.com or on Facebook at facebook.com/KiviBros.